I left sixty dollars on the counter for Henry and told him to pick up some fireworks last July 3 to bring over to Matt and Teresa’s for the Fourth. I told him better earlier than later in the day, as the booth would run out of the assortment packs. I know the assortment packs are not the true fireworks connoisseur’s way of celebrating the Fourth, but I don’t care about the actual incendiaries the way I used to, and I just wanted to have a nice selection of things to light on fire the next night. Henry went later in the day rather than earlier and came home with the Delirium Fountain Supremo, a single fountain about the size of a bread box that cost fifty dollars. FIFTY DOLLARS! “Oh, you went later in the day rather than earlier, didn’t you?”

Lessons learned between the ages of ten and fourteen at the San Fernando Lions Club’s Red Devil fireworks booth in the seventies and eighties remain with me decades later. Only losers buy fireworks on the evening of July 3. They are only slightly less lamented than the sad sacks who buy on the Fourth itself, an hour before sunset. “We have one Piccolo Pete and two packs of Magic Snakes left. You want ’em?” In some ways, I consider the fireworks booth my first job. I didn’t get paid – besides free fireworks – but it did teach me about customer service, dealing with money, inventory, etc. When I applied for my first real job at the L.A. Times, I wrote “Red Devil Fireworks” as prior experience.

My stepfather, Richard, was involved in the San Fernando chapter of Lions Club International, at one point serving as chapter president. Sharing no DNA with my stepfather, I was shocked to find myself later in life getting involved in not-for-profit organizations and serving on boards. In my heart I’m a lazy stoner from North Hollywood, and I’ll never quite understand how and why I keep myself so busy, except it was something I learned by example from Richard.

Richard was gone the third Thursday of every month, attending his regular Lions Club meeting in some San Fernando veteran’s hall. I went once – it must have been a special “kids day.” I won a raffle prize – but mostly that was the night Mom and I ate at Jack in the Box on Laurel Canyon Boulevard for dinner. Richard’s law office was in the city of San Fernando, an independent municipality with its own mayor, fire, and police departments surrounded by the city and county of Los Angeles. It was heavily Latino, and largely working class, but San Fernandans had an independent spirit and a love for their little city that said “We don’t want to be Angelinos!” We lived ten miles south, in North Hollywood – parts of which seem to be called Valley Village now. Since I moved north in 1989, I haven’t been able to figure it out – but Richard loved his adopted community of San Fernando, where he spent more waking hours than he did at home.

He had a little law office that he shared with various partners over the years, and when he and Mom married, Mom served as his secretary. This arrangement taught me that spouses ought not to work together, especially when one is in a subservient role to the other. They’d keep their ill feelings bottled up at work all day, then – unable to escape each other – come home at the end of the day and battle it out. Although Richard had paid a secretary before, apparently once Mom began doing his typing and phone-answering for free, there was no going back to a paid secretary; it wasn’t financially doable. Mom was trapped.

They fought. A lot. Screaming, throwing dishes, me hiding in my bedroom. Sometimes mom would grab me up, throw me in the car, and tell me we were driving back to Sacramento where most of our family lived, from where we had moved in 1978 to live with Richard and his son Mark, my new stepbrother, in North Hollywood. Sometimes we’d get a couple blocks away before she’d pull the car over to break down and cry, eventually turning around and returning home. Once we got as far as the Grapevine, about an hour away, before turning around. Another time, when I was older, I told her I wasn’t coming with her. (I wasn’t choosing my stepfather over her, I just didn’t want to leave. I knew we’d be back, and I was tired of the drama.) My mutiny hurt her; she was shocked I didn’t jump in the Caprice Classic with her, but she left anyway, and returned soon after. My mom was the best person I ever knew, but she had troubled relationships with men. Still, they stayed married until Richard, who was her fourth husband, died, fifteen years into their marriage. She went three years after that. Both of them in their fifties. There was no husband number five, but I’m sure eventually there would have been.

The fireworks booth is what crystallized Lions Club in my young mind. I didn’t really understand where Richard went every third Thursday, or what their mission was. I didn’t know who any of these people were, about whom he spoke, so often and so jovially. But once the fireworks booth came around the following summer, when I was about ten years old, I realized the San Fernando Lions Club was his second family. Here was the Mayor of San Fernando, a couple of city councilmen, professionals and local dignitaries of all kinds. Well, not all kinds: all men, mostly white. The wives had the Lionettes Club, a kind of auxiliary organization that very much seemed the G League to the Lions’ NBA. They would refer to us kids sometimes as Lions Cubs, but we weren’t very organized.

But when the end of June came around, and we started setting up the fireworks booth, we were a united front. We would build, we would stock, we would service customers, because WE WANTED FIREWORKS. I don’t ever remember stealing fireworks. It wouldn’t have been beneath me, but we were just generally allowed to blow off fireworks after closing time with permission of the Lions. There didn’t seem to be much in the way of inventory control going on. As we got older, we learned how to squeeze Piccolo Petes with a pair of pliers right in the middle so they would explode halfway through their whistling. Once, we doctored a Pete, pulled the base off, and rubberbanded it to a pair of tiny, wheeled Legos. It took off like a drag racer, screaming, and blew up about fifty yards away. Boundless joy! 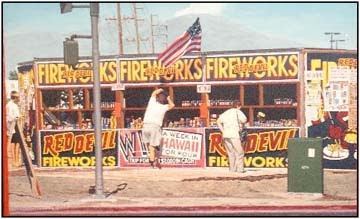 Truthfully, I enjoyed the customer service too. In the seventies and eighties there seemed to be no rules about how old a person had to be to sell fireworks, and I liked working with the public, answering their questions about fireworks: which were good values – literally the best bangs for their bucks. I liked operating the manual credit card machine, running the imprinter over the card and the carbon paper. I liked handling cash, running over to Zelda – the central cashier – and instead of announcing the customer’s total and letting her make the change, like everyone else did, I prided myself on doing the math in my head on the way down the booth and just telling her how much change I needed. When you’re a kid, it’s the small victories that count.

Then when I was fourteen, I found the thing I liked the most about the fireworks booth: a seventeen-year-old blonde named Julie.

Julie was gorgeous, not in an intimidating way, and she wouldn’t have agreed with the assessment, but she was. She was part of an older group of teenage Lions’ kids, and I was a precocious teenager when it came to drinking and partying, so I fell straight in with that crowd. Truthfully, Julie wasn’t that much of a partier; the rest of her crowd – three years my senior – were more so than her, but none of them were like me.

One night after we closed up the booth, four of us were hanging out: Nick, Maggie, Julie, and me. We smoked a little weed and were drinking a bit, but nothing too serious, and someone said there was a wager that I wouldn’t kiss Julie. I’m no fool; I heard this and took my cue, and Julie and I made out a little bit that night. I couldn’t believe I was actually swapping spit with a hot seventeen-year-old, but I wasn’t asking too many questions. The next night, after the Fourth, we all went back to someone’s house, drank some wine coolers, smoked some weed, and Julie and I made the first of two failed attempts to have sex. At fourteen, I didn’t know much what the hell I was doing, and I secretly wanted her to lead the way, but she was as inexperienced as I was, and it wasn’t quite happening for reasons I won’t go into further. But we had a lot of fun, two virgins, and rolled around in our underwear for a couple of hours.

A few nights later we were all in the RV where Nick stayed in his grandparents back yard, and Julie and I had no better luck, although we got fully naked this time. (And Nick and Maggie were getting it on a mere few feet away in one of the RV’s “beds”.) Julie was gorgeous, and I was willing and able, but it wasn’t meant to be, because reasons, and I had to wait another couple of years to lose my virginity to a different girl. Julie and I went out once or twice after that, but that was it. Away from the fireworks booth and Nick and Maggie and the others, it was kind of a different vibe, and we didn’t click that well. I don’t know what she saw in a fourteen-year-old anyway, but it was clear we weren’t soulmates, and I never saw her again after that summer. She must have gone off to college or something.

That was the last summer I worked at the fireworks booth. I don’t know why I didn’t return the following year: maybe Richard was winding down his Lions involvement as his health deteriorated; maybe I was too busy ruining my own life with drugs and alcohol; maybe newer, younger kids took over our spots after Julie and Nick and Maggie went off to college. Regardless, I never saw nor spoke with any of those people again.

When we blew off the Delerium Fountain Supremo over at Matt and Teresa’s on the Fourth last year, it was spectacular. “Well done, Henry!” I said. I don’t know that it was fifty-dollars-spectacular, but it was pretty great. Honestly though, I never cared much about fireworks after I stopped being the one selling them, after my blonde fireworks girlfriend was gone, and after the Lions Club ceased being a part of my life, after Mom and Richard were gone, and after I was done squeezing Piccolo Petes with pliers.

Author of The Case Against Sugar, Why We Get Fat and Good Calories, Bad Calories

Less about burgers and scooters these days.